Back in 2012 and still in high school, guitarist of Out of the Beardspace Zach LoPresti offered his parent’s back yard for shows. It has since evolved into Beardfest, an exceptionally unique weekend of music, art, exploration, and discovery.

Aside from their beautiful grounds and respectful patron base, Beardfest truly sets itself apart with the careful planning and promotion of their workshops. It’s as if workshop facilitators were headlining alongside 2017 musical acts TAUK, Octave Cat, and Antibalas.

“We have always had interests greater than just music,” LoPresti explained. “Actually, after the first Beardfest, the six of us moved to a farm in Virginia and lived outside in tents, grew a ton of food, and cooked over a fire every day; we’ve always been into things like farming/gardening, nature awareness/appreciation, homeopathic medicines, and more primitive building.”

Workshops are among the top overlooked perks on the festival ballot.

We’ve all been there; I can recall numerous broken promises to Sarah Lasoski, yoga instructor and workshop facilitator, where I slept through her workshops on a Saturday morning.

Her Musicasana workshop is among the vibrant array of this year’s schedule.

A fusion of movement and sound, Musicasana focuses flow around a particular artist, usually accompanied by a light show. So far, Lasoski has covered Pink Floyd, the Beatles, and David Bowie.

Lasoski is leveling up and bringing her lovechild to Beardfest with a festival twist of—you guessed it—live music. Robyn Mello of Edenspore and LoPresti will be adding improv melody to movement noon on Friday.

Mello is not just a Beardfest workshop facilitator and performer, but holds the title of the festival’s Education and Vending Curator. Her dedication to the Beardfest family stems from her involvement since the very first festival and over a decade of  friendship with Beardspace members.  Between her work with the Philadelphia Orchard project and her own community-gauged organization Edenpore, Mello’s experience as an educator is not only a passion, but full-time job.

Beardfest patrons started the momentum behind the 2017 workshop schedule. Mello sought out the interests of her Facebook audience, and with roughly 65 workshop applicants to work through, she was able to fill the list of topics and skills derived predominantly from the feedback.

A clear and recurring theme is self-reliance. Some curious classes that make up this year’s 30+ collection include Backpacking on a Budget, Basketry with Invasive Plants, Close Combat Self-Defense, and Mushroom Medicines. You can view the full lineup here.

“I really want things to be participatory as much as possible. I want people to be able to do ‘make-and-take’ skill sharing, and I also want there to be good focus on providing tools for people’s self-sufficiency,” Mello said.

For facilitators especially, the interest Beardfest builds in attendees is both exciting and refreshing. In their years of workshop experience, Lasoski and Mello admit that no-shows and cancellations can become part of the norm.

“Behind teaching it, there are hours of unseen work and preparation that go into these workshops.  If they’re not promoted and no one shows up it does feel like a waste,” Lasoski said.

“I think it’s also people wanting to party too much,” she added. “You know that if you’re up all night and there’s any kind of workshop early in the morning, you’re not going to want to go.”

Again, we have ALL been there, but you may find it’s totally worth waking up for that workshop.  Think about it—all of these workshops are resources available and, as Lasoski pointed out, already covered in your ticket price. Consider the cost of your local yoga class, or where you would even begin looking for a primitive arrow making class.

Think about how much would you pay to attend a discussion hosted by Papadosio’s Anthony Thogmartin.

Beardfest is building an atlas of opportunity for it’s patrons; all you have to do is show up and soak it in.

Any festival fairy will sit there and explain how live music and social interaction is an elevation elixir for the soul, but a music festival has take away beyond grabbing setlists, creating memories, and sparking inside jokes—as important and incredible as they are!

“A big goal of mine is to grow the Beardfest community in such a way that when people leave the festival, they feel empowered to go out and do new things and potentially engage with the people they meet at these workshops on a deeper level…I’ve definitely been able to see it work, and It’s pretty awesome,” Mello said.

The countdown to Beardfest is now in the single digits. Make sure to wake up and break out of your box at the beautiful Paradise Lakes June 1-4th! 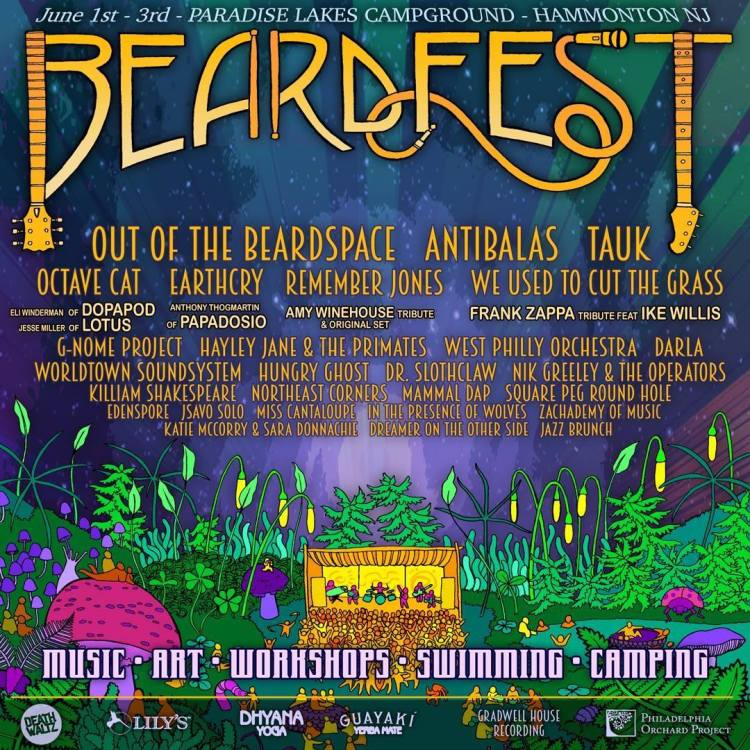 An English and Writing graduate of Kutztown University, Sarah has fused the two passions discovered through her years of study: writing and live music. Her creation of NEPAudio provides a very public love letter dedicated to the local jam scenes stretched across Eastern and Central Pennsylvania. View more posts